For those who would prefer the mountain to the shore there is the recently renovated hotel is located at the top Mt. Profitis Elias (630 m), near a small Byzantine Monastery with the same name. Surrounded by a large cedars, pine and cypresses forrest of a unique beauty, the complex is mainly consisted from two buildings. The larger, a three-storeyed one named Elafos and a two-storeyed one, Elafina, that it is not currently used. The buildings have a very dinstictive architectural character, build like the traditional hostels of the Alps, both with large, stone build walls in the basement and high pitched wooden roofs. Captive deer do graze on the hotel grounds; and the 800m. elevation, provide a coolness especially appreciated by Alexandrian Greeks, who come to escape the Egyptian summer.

The construction of the Elafos hotel or better l’Albergo del Cervo as it was originally named, started during 1929 under the Italian fascist regime (see the Italian architecture in the Dodecanese). The name derives from the presence of herds of Rhodian dears (Dama dama) in the island’s forrests. In 1930, a ground floor restaurant with a large veranda, a tennis court and a dancing floor were added while later on, the second floor was constructed, replacing the veranda. During the year 1932 the building was extended with a new wing, called Elafina. Thus, the hotel was finally named Elafos and Elafina after a certain species of deer that lives in the woods nearby. Recently the large building was renovated and it is currently run by a municipal company. 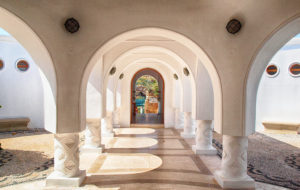 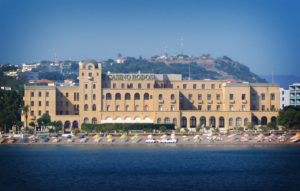 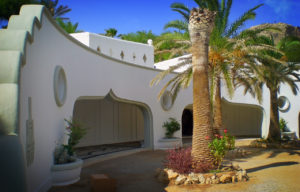