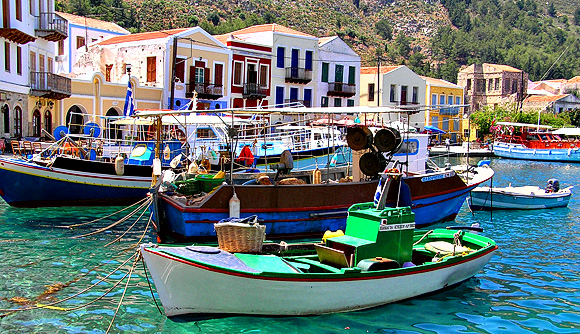 Kastellorizo (Greek: Καστελλόριζο) or Megisti (Greek: Μεγίστη) is a tiny border island at the most eastern point of Greece, very close to the Turkish coast (3 km). It is part of the Dodecanese group of islands distant about 110 km (68 mi) on the east of Rhodes. The current population is 450 permanent residents but during the end of 19th the island bloomed arriving at about 10.000 residents as it was the only safe harbor on the trade route from Anatolia. The decay of the island’s economy coincides with the decline of the Ottoman Empire and the deportation of the Anatolian Greeks in 1923. Currently about 8.000 people that originate from the island, live abroad, mainly in Australia.

The picturesque Megisti (or Chora) is the only settlement, located at the northeast end of the island. It is a tranquil village, built on a slope above and around the natural harbor, full of brightly coloured Greek island houses, two storey neoclassical mansions, churches, and quiet alleys. Buildings of a greater importance are:

The Church of Saints Agios Konstandinos and Eleni (built in 1835),- this is the cathedral of Kastelorizo, an edifice evidently inspired by the gothic tradition. Tradition has it that on this very site St. Helena herself had had a first smaller church built after she was saved from a formidable tempest on her way to the Holy Land in quest of the Cross. What is certain is that the foundations of the actual constructions are laid into the site of an early christian basilica. Its roof has been made to rest on twelve monolithic granite pillars carried all the way to Kastelorizo from the temple of Apollo at Patara (Lycia, in Asia Minor), on rafts. Meanwhile, what once was the temple of Apollo at Patara has been converted into a Christian church dedicated to St. Nicholas. This is where on that saint’s day, many Greeks originating from Asia Minor and other places of the world converge to attend a mass officiated by the very Patriarch of Constantinople in person.

The Palazzina della Delegazione, a single storey remnant of the former fascist occupation, on the east side of the harbor, erected in 1926 by the Italian architect Florestano Di Fausto.

The nearby former mosque dating from the second half of the 18th century and which has been now restored and re-opened as a museum (2007).

The main square, Plateia Ethelondon Kastellórizou, lies at center of the eastern side of the settlement, near the vessel dock. Walking along the opposite side of the harbor you have a clear view towards Pera Meria (the western dock), and the monasteries of Profitis Elias and Aghia Triada. A patway above the eastern side quay leads you to the remains of the Castle of the Knights (14th century) that include the curtain wall, a part of a square tower, remains of a cylindrical tower at the east corner, and toward the sea another cylindrical tower. A Doric inscription, carved in the rock, attests to the existence of an earlier fortress here during the classical times.

Following the steps on the eastern side of the settlement, you will reach the suburb of Horafia and the Cathedral of Agios Konstandinos and Eleni we referred earlier. Further east there is a small bay known as Mandraki, the secondary harbour of the island.

West of the town, beyond the summit of the island known as Vigla (270 m), stands Paleokastro (old castle), the island’s ancient acropolis. This fortified elevation has classical origins with a rectangular plan measuring 60 x 80 m. Inside the castle there is an ancient tower, built with square limestone blocks, and large water cisterns. Carved on the base of the castle there is also a Doric inscription, dating back to the 4th or 3rd centuries BC, with references to Megiste (the ancient name of Kastelorizo) and its dependence on Rhodes. On the east side there are remnants of a gateway, or Propylaea.

Megisti as it was named from the ancient times, has important traces that go back into the time. It has been inhabited since the Neolithic era. The island bloomed during the Mycenaic period, as testified by the findings brought into light by excavations. The Dorians later conquered the island and built the acropolis of Paleokastro. In 530 BC Megisti is dominated by the Rhodians and follows the same historic route with the capital of the Dodecanese. Romans and Byzantine later conquer the island, while in 1306 the island falls in the hands of the Knights of Saint John. In 1440 the island was conquered by the Sultan of Egypt. In 1512 Turkish prevail in the island. Their possession lasted until 1912 when the island was occupied by the Italians. After the end of the WWII the island has finally joined the Greek State.

Today the island is a fine vacation spot, an ideal choice for those that seek a relaxed holiday in a beautiful unspoiled island with crystal clear waters, warm hospital people with great food, super places to stay and a real feeling of discovery. This tiny but beautiful island was chosen for the set of the Oscar awarded film Mediterraneo (by Gabriele Salvatore) and has inspired artistes like David Gilmour from the legendary group Pink Floyd. A boat trip to the astonishing Blue Grotto (Galazia spilià), a luminous sea cavern will offer you a lifetime experience. 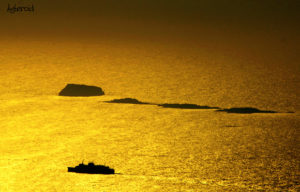