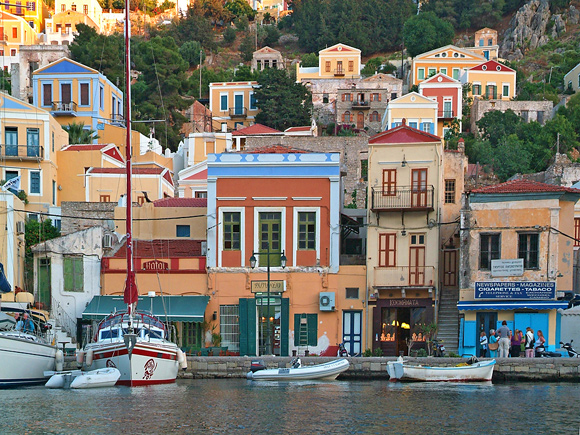 Although Symi Town or Yialos is a small, compact place, it boasts a number of interesting buildings, statues and sights, many of which contain or are set amongst wonderful examples of hokhlaki (pebble mosaic) floors and courtyards.

After disembarking from the ferry, the itinerary for the day trip included visits to local potters, rug-makers and jewellers. Fancying none of these, I decided to explore the little town for myself and put my two and a half hours ashore to what I considered to be far better use.

The first striking piece of architecture to see on the western quay is the clock tower, although none of the local guides I purchased even bothered to mention it. As my architectural knowledge is rather limited I won’t speculate as to its origin, but it is certainly a striking feature. Just adjacent to the tower is a statue of Poseidon, a relatively recent addition to the waterside, although it is now covered in ambergris and, unfortunately, the end of his triton has been broken off. The rather grand white-washed building to the front of here is no less than the HQ of the local police although I’m sure that it would have played a more important role in days past.

Taking the quay back towards the town, you pass the town War Memorial which also features a carved relief of a ship etched into the adjoining rock face, this dating back to the Minoan era although there is scant evidence of the Minoans reaching as far as Symi.

You can mow lose yourself in the tiny back streets. Here I found the lovely town church with it’s ornate bell-tower, hokhlaki courtyard and stunning chandeliers. Again, no information in the local town guide as to who the church is dedicated to but that paled into insignificance alongside it’s architectural attributes.

Just around the corner and you will find the maritime museum, occupying a Byzantine house and decorated with two large ships propellers outside the entrance. This was closed but the frontispiece was ornate and well worth the stop.

The town contains several other smaller chapels, all featuring the hokhlaki flooring and many old buildings, unmarked and now in private ownership that certainly must have a story to tell. I got the impression that Symi Town focuses too much upon it’s sponge image and that other sights in the place were either locked, closed or simply not even worthy of a mention in the so-called “guide leaflet” that the local shops sell for a couple of euros.

I felt this to be a great travesty but maybe all they want you to do is to be relieved of your cash and sent packing back onto your ferry with a minimum of fuss. What a pity…