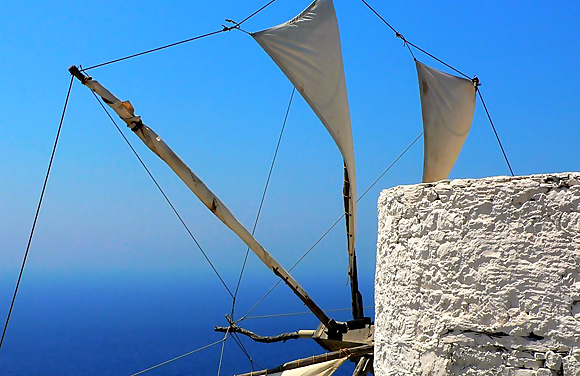 Their eyebrows are black and thick and their facial expressions austere and proud. The women from the small village of Olympos, high in the north of the Greek island of Karpathos, are different from the women on the rest of the island. This part of Karpathos has the harshest landscape on the 300 square kilometer island thanks to its craggy coastline and the waves that crash upon the shore. But its olive groves and hidden bays also make it the most beautiful place on Karpathos. Olympos is difficult to reach. You can drive by car, but the road is unpaved and full of potholes and steep inclines falling away to the sides so it is better to take the ferry that travels twice a day from the island’s capital, Pigadia.

The islanders have for years bemoaned the condition of the roads as “a disgrace”. But the laid-back Greek attitude has made its mark here and most people have become used to the conditions. It’s easier to simply wait for the day when the decrepit earth removers finally transform the old road into a proper motor-way.

But until that day comes, the 350 residents of Olympos will have little contact with tourists – a fact that both annoys and pleases them at the same time. That’s because during the day there are many visitors combing the town’s narrow streets for souvenirs. In the evening most of the them have returned to their hotels. While they are here they don’t leave much money behind and many treat the locals like exotic animals.

“We feel a little like being in a zoo,” they complain. If they are going to be photographed all day long, they would like to have something from it.

However, it’s unlikely that Karpathos will experience a boom in tourism. While the island between Rhodes and Crete has an excellent climate, it lacks that special ingredient that many tourists are looking for:
“You are in the wrong place if you are looking for all-night parties,” says Alexandra Haugg. Haugg has been running a windsurfing school in the south of Karpathos for the last 10 years. Thanks to the island’s geography, Karpathos has excellent wind conditions and it enjoys the reputation of “Europe’s windiest place”.

Surfers, trekkers and individual tourists are drawn to Karpathos seeking the quiet life – something they will definitely find here. Surfers have wind and hikers have plenty of walking routes to choose from including the “Kali Limni” – the highest point in the island with almost alpine-like conditions. When the guidebook describes a bay as “isolated” it really is true. Prices are reasonable and the locals are not weary of the foreign visitors. It’s not unknown for guests to spend time in their host’s kitchen watching them prepare a meal or for joggers to be offered water from concerned farmers who can’t understand why a stranger would want to run along a rough road.

At first glance, Karpathos is no ordinary Greek island. There are no small whitewashed houses nestled between green hills. The landscape is barren and the trees bent over from the constant wind.
The island’s charm is revealed later, at the latest when the flight personnel at the airport issue you with a handwritten boarding card. That’s when you know that mass tourism has not reached Karpathos.

You can get to Karpathos (AOK) from Rhodes (RHO) by air. Olympic Airlines is the only Greek airline with direct flights from Rhodes (RHO). There are also connections from Athens (ATH) and from the neighboring Sitia (JSH) in Crete. During the summer you can find a number of charter flights operated by various companies like LTU, Transavia and Austrian Airlines.

During the year there is a regular ferry connection operated by Lane Lines, that connects Rhodes with the two ports of Karpathos, Diafani and Pigadia. During the summer there are connections served by Blue Star Ferries and GA Ferries.

Thanks for letting us know!
This is how we improve bertha
What did you expect to happen?