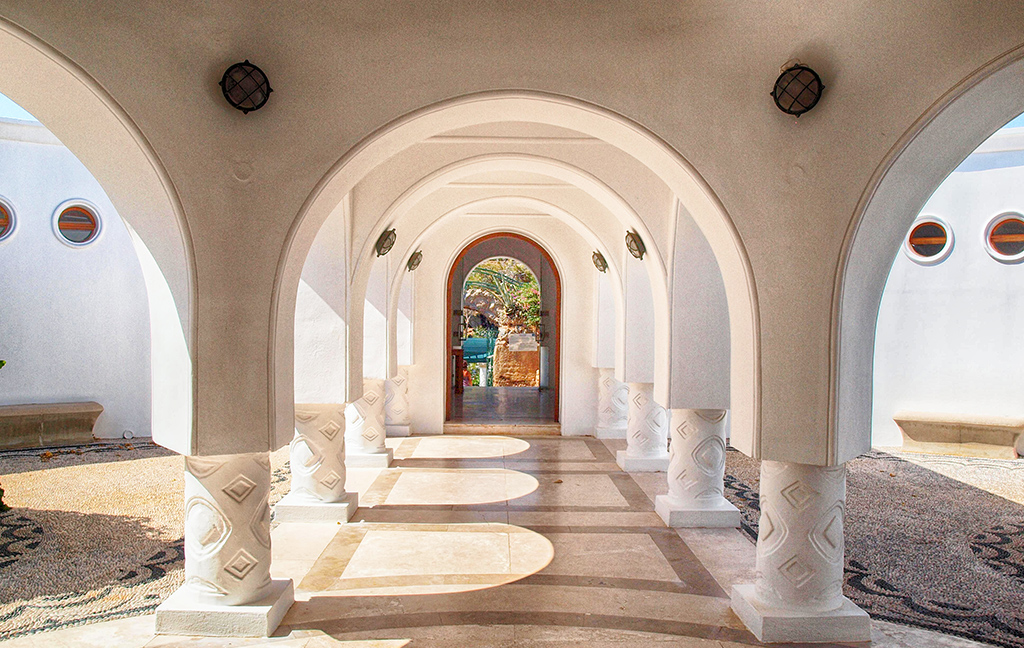 The unique little town of Lakki

A quite remarkable example of Art Deco architecture, Lakki was built around wide boulevards by the engineers Sardeli, and Caesar Lois, an Austrian. Leros was selected to be a military base due to its geographical position. The buildings are unadorned and less pompous than those of Rhodes and Kos, though equally impressive in this place. Without complicated morphological features, the interesting features of this architectural style are the form, the use of colours and materials as well as the plasticity of volumes, which is often quite daring.

A naval yard was built at Lakki bay, the largest natural Mediterranean port. A new town called Porto Lago, inhabited exclusively by Italian colonists, was built to serve the needs of the yard. The first expropriations and infrastructures started in 1928 and works lasted until 1936. The plan proposed that the central operations –administration, market, services and culture– are in the centre of the settlement, thus forming peripheral dwelling zones for army officers. When planning the new town, the architects R. Petracco and A. Bernabiti managed to create an exceptional ensemble of Mediterranean rationalism. The model town was all curves and featured a saucer-shaped market building with clock-tower (R. Petracco, 1934-1936), the church to San Francisco (A. Bernabiti, 1935-1939, a cylindrical Town Hall and Fascist Centre, dating to 1933-4; the elementary school (R. Petracco, 1934-1937) and the impressive Hotel Roma, later the Leros Palace hotel. The hotel and cinema complex were completed in 1937 for visiting Italian performers. Near the waterfront there is a monument to those who perished in 1943 when a Greek ship, Queen Olga was attacked by German planes and sank in Lakki’s harbour.

The International Style has produced a unique little town in Lakki, which for many years neglected and disliked by the Greeks seemed to be fading away with time. The Italians during their occupation created some amazing buildings on the island both at Lakki and Lepida, but it is Lakki that stands as a great example of the grandeur of the Italian rationalism, with its white surfaces, amazing promenade and open wide spaces it gives the impression of more like Miami and less like a Greek island in the Dodecanese. In recent years there has been more awareness of this unique legacy and its tourist potential as witnessed by the development of Lakki Marina to exploit the uniqueness of this superb harbour and the unique townscape.

These days the buildings of the Italian occupation, together with the rest of the traces and monuments of other civilisations (Ottoman and Frankish), are parts of the architectural inheritance of the Dodecanese. As the Greek State grows in self confidence and as memories of the Italian Occupation mellow (after all, in the end the Italians and Greeks fought as allies against the Germans) there has been a more balanced appraisal of the value and significance of the architectural heritage which has been bestowed on the islands. With this reappraisal there has been a revaluing of what is now part of the architectural patrimony of modern Greece. Hopefully this reappraisal along with the desire to drive tourism (now the main economic driver in the Dodecanese) upmarket to correct the mistakes of going for the low value mass tourism trade in the past will translate to grater conservation of this unique and exciting built heritage which complements the many other influences over the millennia which give these islands a unique historical context and sense of time and place.[/vc_column_text][/vc_column][/vc_row]