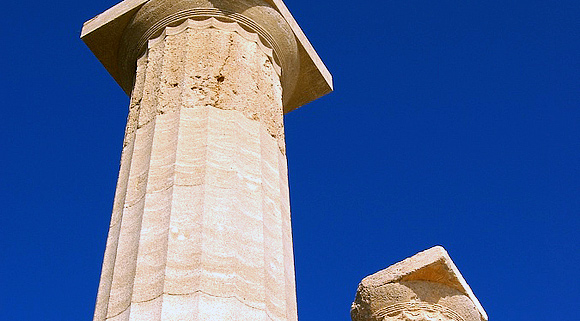 Like almost every part of Greece, the island has a number of important archeological sites, evidence of a history of over three thousand years. Excavations bring every year to the light new foundings. It is common in Greece for a church or an important building to be situated over the relics of an acient temple, or for medieval fortification to use ancient castles and walls.

Because of the continuity in the island’s history and the consequent re-use of materials and, in some cases, of entire buildings, much of the historical-artistic heritage is assimilated also into the structure of all old constructions. In this sense, Rhodes is an open museum, where traces of the past eras can be found even on a humble village house.

Probably the most important archeological site on the island is the unfortified ancient town of Kamiros, one of the three Dorian cities founded on the island, located on the southwest part of the island. But it is the magnificent Acropolis of Lindos, built on rock over the village, accessible only on foot or with a donkey, the most visited one. Its doric Temple of Athena is located inside a Medieval Castle, thus creating an interesting blend of two cultures. The construction of the Acropolis is dated at 1100 B.C.

No more than one kilometer from the center of the city, on the beautiful hill of Ayios Stefanos (monte Smith), lie the sparse remains of the Hellenistic Era of Rhodes. The site contains a restored theater, a stadium and the remains of the temple of Apollo.

On the top of the Filerimos‘ hill, are the few remains of the acient Ialyssos together with a Byzantine castle and monastery.