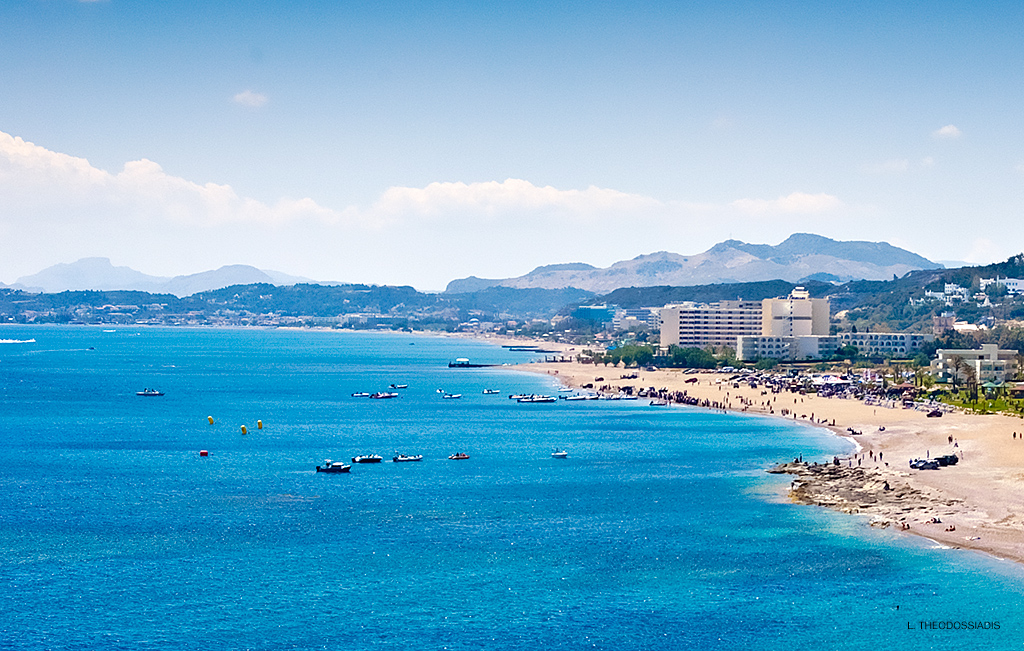 A renowned, wonderful 4 km long stretch of sandy beach offering every type of water-based activity, from parasailing to jet skis, at just 14 km from the town center. Packed with deckchairs, umbrellas and sunbeds, Faliraki is the most well organized beach on the island with every kind of facility, from nice beach bars and restaurants to a dedicated nudists beach.

The area around the south part of the beach of Faliraki is the most lively. Attracts mainly younger people and partygoers. There is always a party somewhere in one of the numerous colorful bars. Well at least that is going to be the impression if a first-time visitor drops by Club Street and Bar Street at night during the peak season. Every summer, locals anticipate the British invasion as thousands of holiday seekers from the United Kingdom flock to the many clubs of Faliraki, to dance their worries away. Among the most popular clubs are Bed, Q Club, and Ziggy’s. Faliraki’s eateries are as varied as any major city in the world. There are local Greek taverns, fast food outlets, steak houses, and even Chinese restaurants. Many of these establishments are open until the wee hours of the morning to cater to the needs of those who are into the local club scene

However, on the northern side of the beach, on the part close to Kalithea, there is a completely different world. Here you will find some of the most luxurious hotels on Rhodes in a more relaxing environment while the activities here are mainly focused to families.

For the naturists amongst you, the nudists beach of Faliraki is located at the most southern part of the resort, below the hills of Aghios Ammos. There is a small road that takes you over the hill and then winds down to a nice, secluded beach and a small bar with sun loungers and umbrellas. As it is surrounded by cliffs this place is much hotter than the main beach. If you need more privacy there are some sand dunes at the top of the hill. There are also some small alcoves along the beach front, between the rocks. The beach is clearly signed in all languages as a nudist beach, so normally, you are not going to find any extraneous people hanging around.